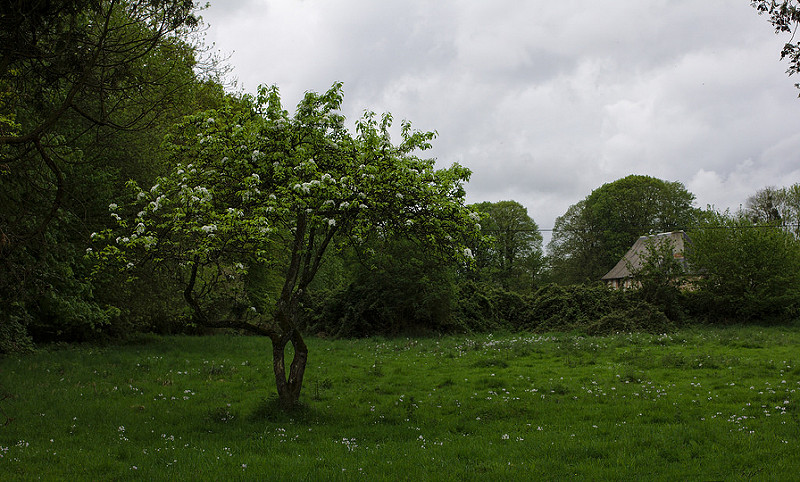 Years ago I had a neighbor who had an apple tree that he loved. That apple tree had produced wonderful fruit for him for years. Then one year it didn’t even flower. He was very concerned. He spent a fortune on soil amenders, and hours checking his tree for any traces of disease or pests. He staked the tree and put up a wind break, just in case the gusty evening wind was blowing off buds. By the end of the summer, he was certain that he had cared for the tree and that next year he would have a bumper crop of fruit. But he was wrong. Again, there was nothing. Again, he did everything he could to try to pamper this tree into production. This went on for five seasons. His wife suggested they just cut it down, but he had poured so much time, money, and concern into this tree that he didn’t want to just chop it down. However, one fall night after bringing in a box of apples he had purchased at a stand, he snapped. My neighbor took his baseball bat and whacked at that tree like a madman. He took out all of his frustrations on this old tree. Exhausted, he flung the bat aside and decided that in the spring, he would take out this tree and put in a new one.

By the spring, my neighbor had picked out his new tree. He was ready to move on. He took his axe out to the tree to start hacking off the branches, but then he noticed something. Buds. There were tiny flower buds all over the tree. He had never seen it so full of little blossoms. Over the next few weeks the tree filled in with magnificent blossoms and in the fall he had the largest harvest of apples that tree had ever produced. And he swears that the apples were never so good.

It turns out that whacking a tree to produce fruit is actually something farmers would do a long time ago. There are several different mechanisms at play here to explain why this works, but what seems to mostly be happening is that the outside stress causes the tree to release traumatin, a hormone similar to adrenaline in humans.[1] This hormone tells the plant that its survival is in danger and thus, stimulates the production of flowers and seeds. The problem my neighbor’s tree seemed to be having was that everything was going well for it. He was ensuring that it got everything it needed and protected it from feeling any struggles. The tree just kept things nice and static, it didn’t “feel” the need to be productive because everything seemed to be going great. As far as the tree was concerned, it was doing great, and had no idea how close it was to being chopped down.

While my neighbor had spent lots of money trying to help his tree, he was only pouring his resources into things that kept the tree in stagnation. Many companies do the same thing. They become more concerned about how things are right now and how they have always done things, than they are about looking to the future and making sure that they are truly being as productive as they can be. For these companies, their size or position shields them from the winds around them – for a time. And because of that, they often don’t see the axe that is coming. This is why companies and management cannot become complacent. They must embrace the 5th HPO factor: Continuous Improvement and Renewal. Just because things feel great now, does not mean that management can sit back and just let things continue. Constantly evaluating and renewing processes keeps firms strong and viable. It keeps them attuned to the winds of change and aware of threats. Continuous renewal helps keep companies focused on their goals, the fruits of their production, and can help them avoid sinking money into areas that will just stagnate. Without continuous improvement and renewal, it’s just a matter of time before the axe takes them down.